The iPhone 12 may have just launched this year, but that doesn’t mean the 11 and the XR are obsolete – in fact, their prices are dropping and it’s a great time to starting thinking about either of these phones.

Released only about a year apart, the iPhone XR (October 2018) and iPhone 11 (September 2019) are two of Apple’s most popular iPhone models. Both phones were bestsellers for a time, with the iPhone XR being the best selling iPhone in the third quarter of 2019 and the iPhone 11 being the world’s most sold phone in the first half of 2020.

At first glance, the two models are extremely similar. After all, they are the exact same size, with no upgrade in the display screen. However, delving deeper into two phones, there are notable differences, such as in the camera, performance, and battery life! Keep reading to get the details. 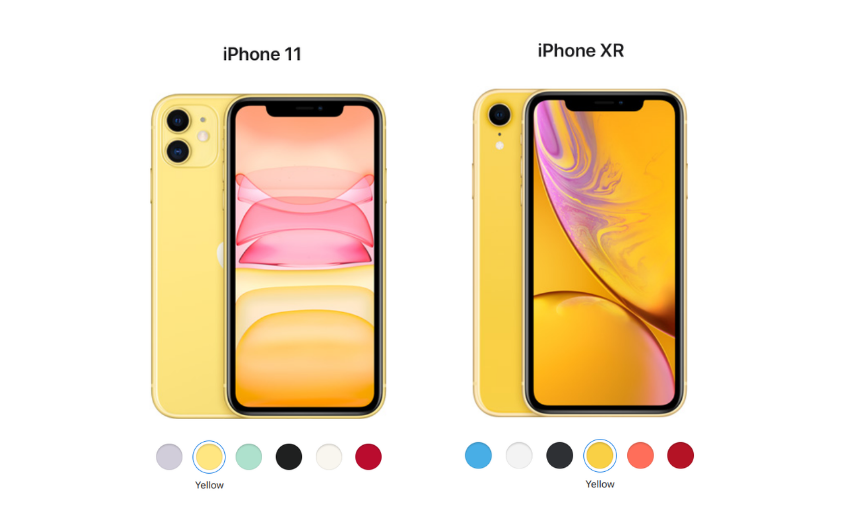 Because of the order of release, the older iPhone XR can typically be found at much lower prices than the iPhone 11. Some upgraded features in the newer iPhone 11 could be used to justify this price gap. Check out the differences between the two models below.

Without a doubt, the biggest difference between the iPhone 11 and the iPhone XR is the camera design.

For those who aren’t too particular about camera features, the iPhone XR is a great device that can give you high-quality photos. It has a 12MP wide camera with digital zoom up to 5x, optical image stabilization, and True Tone flash with Slow Sync. The XR back camera also has the popular Portrait mode with advanced bokeh and Depth Control, as well as three Portrait Lighting effects: Natural, Studio, and Contour.

The iPhone 11 has everything that the XR has and takes it up a notch with improved features. With the addition of an Ultra Wide camera that has a 2x optical zoom out, it boasts a dual-camera system that is great for capturing expansive scenes and helpful in tight spaces. It also has Night Mode, Deep Fusion for more detailed textures, brighter True Tone Flash, and three additional Portrait Lighting effects: Stage, Stage Mono, and High-Key Mono.

Apple’s iPhone 11 has a dual-camera system.

The front camera on the iPhone 11 also has a few upgrades, including 12MP photos, 4K videos, and Slo-mo video support. Both devices feature Portrait Lighting with six effects for the front camera.

Each new iPhone release typically comes with an upgraded chipset and the transition from the iPhone XR to the iPhone 11 was no different.

At the time of its release in 2019, the iPhone 11’s A13 Bionic chip and third-generation Neural Engine was touted as the fastest chip in a smartphone. Apple also boasted about efficiency, stating that the A13 was 40% more efficient than the A12 that is in the iPhone XR.

Of course, with the release of the iPhone 12 line-up in late 2020, Apple announced its new A14 Bionic chip which now claims the title of the fastest chip in a smartphone, with a 15% jump in performance and a 30% performance in power efficiency compared to the A13.

In terms of cellular speeds, the iPhone 11 has another advantage over the iPhone XR. The 11’s Gigabit-class LTE enables it to boast significantly faster 4G LTE speeds than the XR with its LTE Advanced.

Other than that, the battery features of each phone are pretty much identical, with both capable of Qi wireless charging and fast-charge.

While both devices are made from aerospace-grade aluminum with a glass front and back, the iPhone 11 does have superior water resistance compared to the iPhone XR.

The iPhone 11’s upgraded IP68 rating means that it can be submerged in water of up to 2 meters for 30 minutes. This is an improvement over the iPhone XR’s limit of just 1 meter.

A final significant difference between the iPhone 11 and iPhone XR is the colors they come in!

Ready to buy an iPhone 11 or iPhone XR?

Now that you know the differences between the iPhone 11 and iPhone XR, you can make the decision on which device is the better choice for you!

Whether you see the XR as the best value for your money or are wanting to invest in the upgraded cameras of the 11, there are plenty of both models available on the market for you to purchase. A popular option is to consider premium used iPhones, which allow you to save hundreds of dollars compared to buying a brand new device.

You can check out the iPhone XR on our marketplace here, or the iPhone 11 here.

At Glyde, we have a collection of pre-owned iPhones and you can also sell your old device!

At Glyde, we have a talented team of writers that spend hours upon hours conducting research, talking to experts, and writing articles that will help you make better decisions buying and selling mobile phones.