With its recent release of the iPhone 12 line, Apple entered the arena of 5G smartphones. Samsung, on the other hand, had adopted the 5G network standard months earlier with its Galaxy S20 line. So, between the two flagships, which is better?Looking at various features between the Galaxy S20 and the iPhone 12, we’ll see all the ways in which each device wins or loses against the other. Keep reading to learn the details and get an idea of which one you should buy! 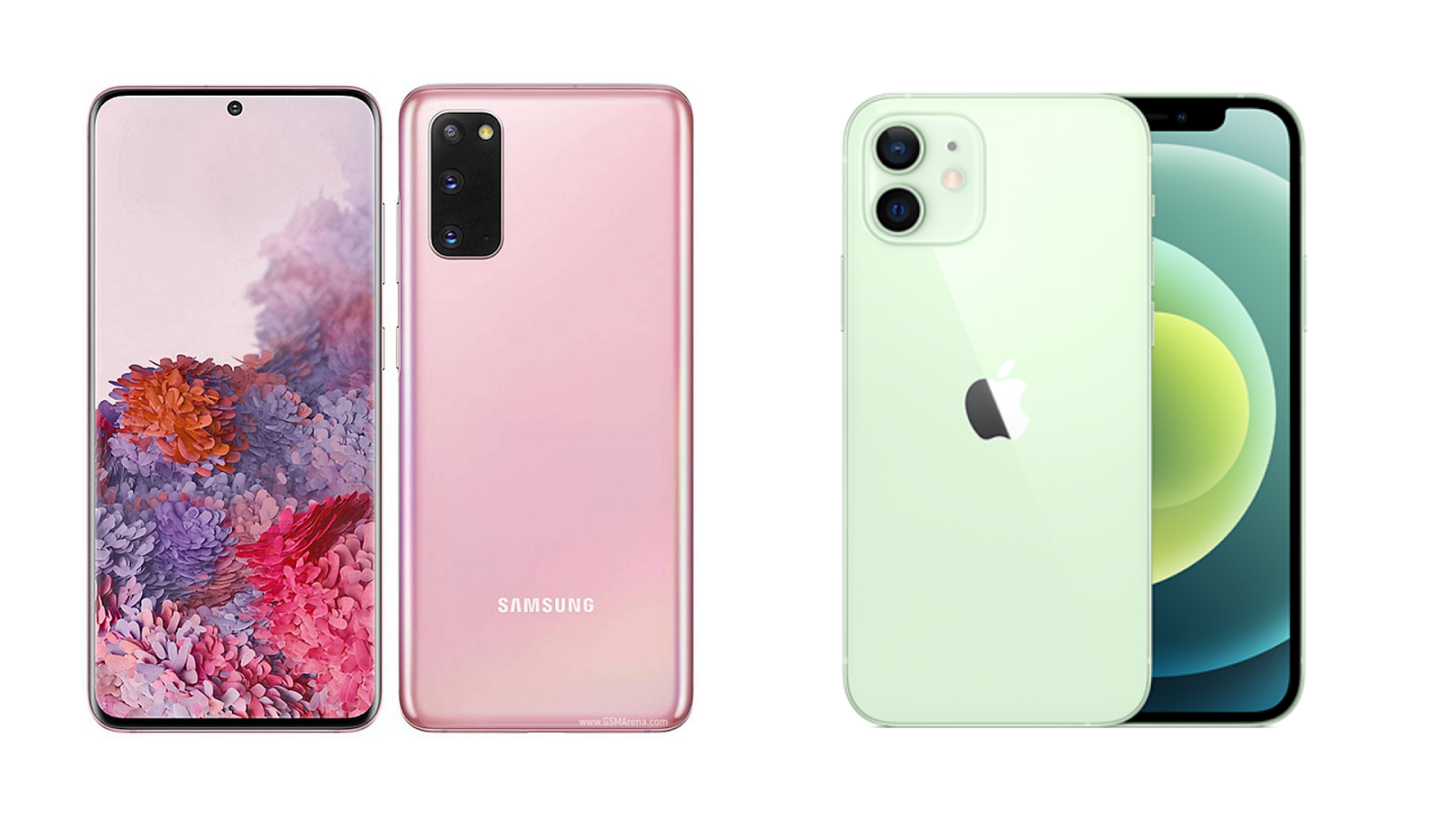 Between the iPhone 12 and Samsung Galaxy S20, which is better?

Both devices offer some of the best displays on the market, but the Samsung Galaxy S20 does have an edge over the iPhone 12 when it comes to details of the screen.

Compared to the iPhone’s OLED display and 2532 x 1170 resolution, the Galaxy S20’s AMOLED display is brighter and more vivid, as well as has a sharper resolution of 3200 x 1440 pixels.

The Samsung device’s edge-to-edge screen also makes it larger & sleeker compared to the Apple device, which still has the rather large black notch at the top.

When it comes to the camera, the better phone will ultimately depend on whether you want to be able to do a lot with the camera or if you just want the best-looking photos. While the Samsung Galaxy S20 has a wider range of camera features and options, Apple’s iPhone 12 tends to produce better photos.

However, more technical features don’t always mean better end results. For example, digital zoom tends to ruin the quality of photos and 8K videos are huge files that most monitors can’t display quite yet. With better sensors, the iPhone 12 produces photos with higher detail and dimension than the Galaxy S20. Apple’s Night Mode is also a lot crisper than Samsung’s and, while photos on the S20 do tend to have more vivid coloring, the colors are not always accurate.

Apple has been ahead of Samsung in terms of pure power for quite some time, making it unsurprising that the iPhone 12 is superior to the Galaxy S20 when it comes to speed and performance.

The iPhone 12 has Apple’s newest A14 Bionic chip, which is the fastest in any smartphone. The Galaxy S20’s Snapdragon 865, on the other hand, had already been bested by the older A13 Bionic chip found in the iPhone 11.

Still, the Galaxy S20 does have double the RAM compared to the iPhone 12. So while the Samsung device is technically slower, it’s not too dramatically behind the 12.

Samsung’s Galaxy S20 has a clear upper hand when it comes to battery life. Most tests have the Galaxy S20 outperforming the iPhone 12 by one to two hours. However, if the 120Hz refresh rate is enabled on the S20, then its battery life decreases significantly to shorter than the 12’s.

In terms of charging time, the winner depends on the type of charger used. The Galaxy S20 comes with a 25W charger that has a comparable charge time to Apple’s fast-charge 20W adapters. The MagSafe chargers, which are 15W, are expectedly slower than both.

Unfortunately for iPhone users, in Apple’s efforts to cut back waste, the devices no longer come with any adapters.

The iPhone 12 has a slight advantage over the Samsung Galaxy S20 in terms of durability. The iPhone 12’s ceramic shield is boasted to be 4x more drop-proof than its predecessor and stronger than the Galaxy S20’s Gorilla Glass 6 screen.

Besides the above difference, both the Samsung Galaxy S20 and the iPhone 12 are similar in size, shape, and weight, though the S20 has a curved edge as opposed to the 12’s newly flat edge.

Both smartphones also have the exact same water resistance rating of IP68, meaning they are dust resistant and can be submerged under 1.5 meters of water for up to 30 minutes.

When it comes to storage and colors, the better device will depend on your personal preference.

The Galaxy S20 only has one storage option of 128GB. As with most of their devices, Samsung’s Galaxy S20 has a MicroSD card slot that can hold up to 1TB. This makes the S20 a great option if you need huge amounts of storage or want to save money by purchasing a MicroSD card rather than a higher capacity device as you would have to with an iPhone.

The iPhone 12 comes in three storage options: 68GB, 128GB, and 256GB. There is no MicroSD card slot for you to add more storage.

In terms of colors, the S20 has four muted tones as opposed to the 12’s five brighter colors.

Your preference between face ID and fingerprint sensors may also determine which device is better. The iPhone 12’s Face ID is an immensely convenient option, but the lack of a fingerprint ID option has also left some users frustrated. On the other hand, the Galaxy S20’s in-display fingerprint sensor means you can unlock your phone just by pressing on the lower half of the screen.

For the iPhone 12 line, Apple also launched MagSafe, its new ecosystem of accessories that attach magnetically on the back of the device. From wallets and cases to wireless chargers, the new feature improves convenience & style.

Which phone should you buy?

The Galaxy S20 and iPhone 12 are both great 5G options, with the better smartphone really depending on what you value most.

Those focused on high-speed performance, durability, and taking the best photos will find the iPhone 12 to be the best option, while those who care more about battery life, quality display, and flexible storage options would likely prefer the Galaxy S20. Other considerations, like color or ID preference, should also be taken into account!

Selling and buying phones on Glyde

Whether you’re in the market for a new, yet affordable phone or want to get the most money from selling your own phone, Glyde is your go-to site for buying or selling used phones!

As a trusted marketplace specifically for premium pre-owned smartphones, Glyde offers a more transparent and secure way to sell your used phone. With digital contracts and diagnostic testing, you won’t have to worry about dealing with unscrupulous buyers. And with prices set by supply and demand, rather than algorithms and sponsored listings, you can be confident that you’re getting the true value for your device. Find out how much your used phone is worth and get started today. Or check out Glyde’s well-inspected collection of pre-owned Apple and Android smartphones!

At Glyde, we have a talented team of writers that spend hours upon hours conducting research, talking to experts, and writing articles that will help you make better decisions buying and selling mobile phones.